Get me outta here!

When I first discovered exercise in any meaningful kind of way I was 22 and a good 50 pounds or so overweight. I joined a gym in NY and was given a basic program to follow by my then gym instructor. I visited the gym each day and by following the program I was able to eventually shift the weight. Now much older and having had two children my body has changed again (for the worse!) and this time I find it much harder to burn fat and tone compared to my younger years.

I still keep my fitness regime going by trying new things and different classes at the local gym,  but I have been wondering for the last year whether a personal trainer may be able to help me break the plateau. So in September this year as an Anniversary present from my husband Todd, I was gifted with 20 personal training sessions! I guess some wives  may have taken offense by such a gift! Being a fitness addict, I was delighted as it has been something I have been hinting to Todd for the last 12 months.

My personal trainer was Mark from MotivatePT and he was a lovely guy. Before he turned up, I was excited but also slightly worried in case he thought I was really out of shape! During the consultation he sat down with me and told me what we would be doing and began looking at my goals. I told him about my post-pregnancy bulges that had never really gone away and he informed me that I would need to tighten up my diet and increase my calorie expenditure. “Don’t worry” he told me, “I will provide you with a diet plan that I’d like you to follow for the next 10 weeks as part of the fitness program.”

My first session was booked in the very next day and we met in the park. I was expecting Mark to appear with lots of fitness equipment but instead he turned up with nothing. “Okay”, I thought, “he’s forgotten to bring the exercise equipment – this is going to be an easy workout”. Mark explained that for this first session he would be concentrating on body weight exercises and circuits in order to assess my strength, endurance, posture and imbalances. I had no idea what was in store for me!

We began with a stretching routine and then started with what Mark described as warm-up exercises – jumping jacks, squat thrusts and mountain climbers. My legs felt like they were about to fall off. “Okay” said Mark, “that’s the warm-up over!”

As the session went on my body strangely learned to work through the pain threshold that I was experiencing and the initial agony subsided – to be replaced by a slightly less painful burning sensation in my thighs and arms! We worked on interval drills, callisthenics and timed routines based upon jog/sprints. By the end of the workout I was shattered yet felt strangely alive and alert! Okay, so a few days later I could hardly walk, but I was told that my body would adjust very quickly, and it did! By session two I was really up for whatever Mark would throw at me and so began the 10 week program.

Throughout the 10 weeks each training session was changed so that it was slightly different to the previous one. As soon as I felt I had mastered an exercise, Mark would change it! He told me that this was to ensure that my body was constantly challenged. We worked a lot on jogging, sprints and intervals when in the park, but also did lots of boxing, kickbox, kettlebells and core training. I also did lots of exercises I had never heard of before like resistance work with powerclubs, agility ladder drills, speed cone training and battling ropes which got my heart racing and made my arms feel like they were going to fall off! Each session lasted for 60 minutes and I really could not have done a single minute more! Some days I have to confess I felt like giving up, especially when my brain was telling my legs to keep going but my legs just wouldn’t respond!

I trained with Mark twice a week for 10 weeks. I was also given a 60 minute program that I had to follow on my own each week, which was basic body weight interval circuits. I was also given a nutritional plan which was limited to just 1400 kcal a day. By the end of my 10 week program I had lost 23 pounds, dropped 7.5% bodyfat and almost 6 inches off my waist (my problem area!). I also gained tone to areas that had been flabby since childbirth. I was really surprised just how much I changed my whole body shape.

The Verdict
Does personal training work? Clearly it does – at least for me. All my colleagues at work were asking me what I was doing and my friends and family were amazed with how much weight I lost. Only my youngest daughter was unhappy telling me “Mummy you’re disappearing!”

All that said, it was probably the most intense training regime I have ever done for that time period and there were some days when I was really tired and just didn’t want to do it! But I could always hear Mark’s voice in my head, telling me “no excuses!”. I followed a 1400 kcal diet whilst on the 10 week program which was tough at first but then became very easy to follow when I got used to it.

For me the personal training was just a program to jump-start my body and for this it has definitely made a huge difference. The program was also the inspiration I needed to start training again with a far greater level of intensity than how I was doing before on my own.  I am definitely a fan of personal training and were it more affordable I would actually love to do it every day! I would certainly want to book some more sessions again. I am hoping that my husband will buy me some more training this Christmas!

My personal trainer was Mark from Motivate Personal Trainers

Okay, so anybody who knows me will be aware of how I love to mix up my sessions and try new things. I have read so much about sandbag training recently that I thought I would give it a go. Sandbag training is very literally back to basics. Sandbag training is a form of resistance training but is much harder than handling barbells or dumbbells as they are unstable and so will move around improving your stabiliser, trunk and grip strength.

Sandbags have been used for hundreds of years so are clearly nothing new. But their introduction into mainstream gyms and training programs is definitely a new craze. There are now classes based upon them and most gyms now have sandbags as apart of their equipment range.

Due to their unstable nature, it seems you will not be able to lift as much as perhaps you do with a barbell. I began with a fairly light 12 pound bag. Straight away I was struggling with it. The first lift I have to confess that I dropped it! But that was no bad thing as one of the benefits of sandbag training is improving your grip strength and it was clear that my grip was lousy! 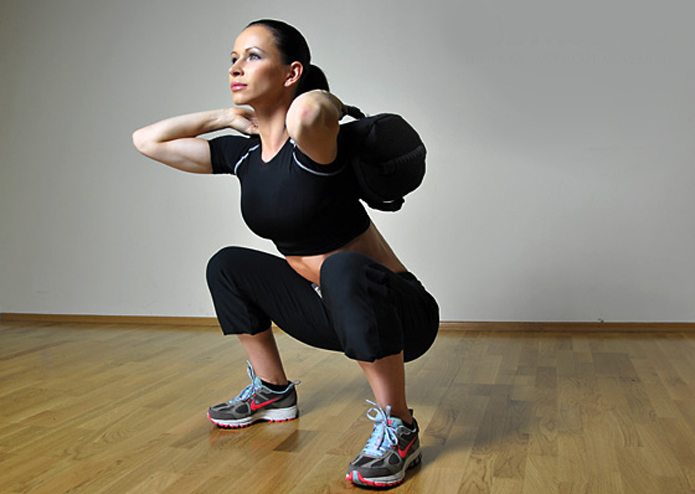 The main asset of the sandbag is that it is malleable so will mould to your shoulder or body making it the ideal tool for throws, sprints or carries. Many people start off with homemade sandbags. For this you buy yourself a cheap duffle bag for a few dollars, then get yourself some sand from the builders yards again for a few dollars, seal it in and double bag it in a polythene bag and zip it in your duffle bag. Okay, so this is one way, but for me I preferred to buy one. Mine is pink (yes very girlie) but is very well made and I think it could take plenty of punishment without breaking or splitting. Just like the one pictured below mine also has about 6 different flexible handles so it makes performing the exercises a little easier for beginners.

I began with some bear hug squats which you perform with the sandbag hugged tight to the chest. I then tried an alternative squat (pictured above) with the bag held across the shoulders. I also did floor presses (like a chest press), high pulls (like an upright row) and backward drags (dragging the sandbag for 20 yards along the floor, stopping, turning and then dragging it back). Wow. This was amazingly draining work. I am just a beginner so I am sure my workout seems pretty pathetic next to the experts but I can see straight away the benefits of this type of exercise. I will defintiely be integrating sandbag exercises into my routine from now on and look forward to developing more routines. 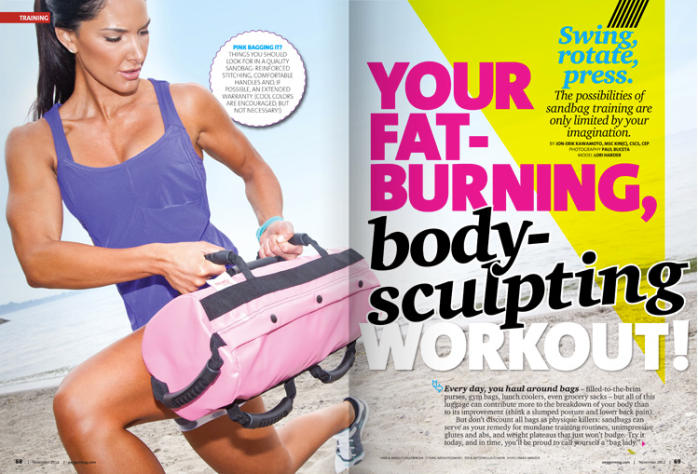